In the aftermath of the decade long Nepali insurgency, a peace building initiative, Nagarik Aawaz has committed to further indulge in peace building works by initiating a Peace Building Centre in Nawalpur, south central Nepal.

Peace building process involves communal interactions and participation, where experiences and stories are shared among each other. The interior of the 1.5 hectare premises has been designed to support these activities including areas for academia and visiting faculty. In parallel an ecologically sound landscape concept has been adopted as to address contemporary environmental sentiments, given its vicinity to the Narayani River and the Chitwan National Park. 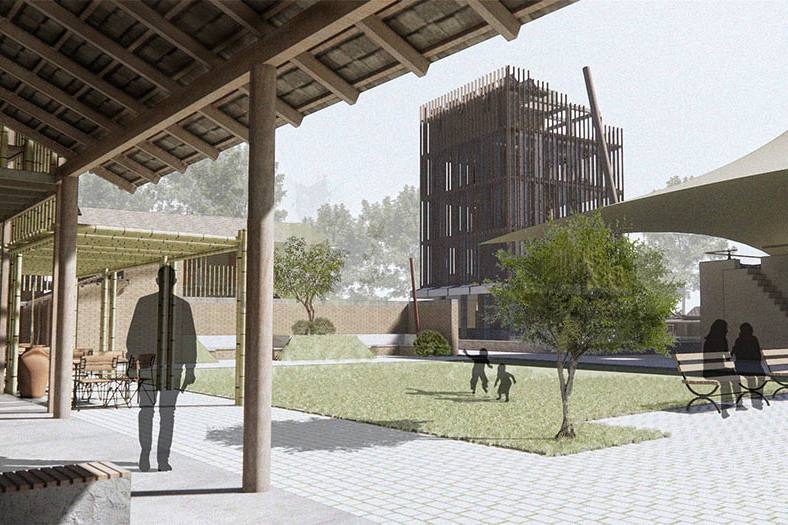 The peace building process involves communal interactions and participation, where experiences and stories are shared among each other. The general topic of discussions can be the civil wars, ethnic intolerance, gender inequality, social taboos, mental instabilities and other aspects of peace in people lives.

The approach for the process can be further narrowed down into passive and active interaction. The passive interaction processes would be involving in ‘self-practices’ of understanding through: reading, observing, watching, and listening. Libraries, museums, audio-visual rooms, meditation halls and contemplation areas can assist in the processes.

The active interaction processes would involve two or more persons interacting with each other, may that be story-telling, consulting, workshops and training amongst others. Amidst wide spread paddy fields of the Terai, hedges and trees demarcate the plots extending up to the banks of Narayani River to the south. These paddy fields are linked with the meandering earth roads. At junctions, the shelters of the Tharu community are scattered along the road. These clusters are generally surrounded with large fruit bearing trees.

The project site falls under the jurisdiction of the Madhyabindu Municipality with an area of 13,600 sq.m. (1.36 ha.) of agricultural flat land, the Narayani river to the south and the Chitwan National Park on the adjacent bank. The site itself lies within the buffer zone of the National Park. Access to the site is linked by an earthen road on the northern side that has branched some 8 km from the Mahendra Highway. There is a secondary road on the eastern side of the plot.

The site vista is encompassed by fields all around, canopies of the national park jungle can be seen in the distance towards the south. The site is segregated into two parts by an irrigation channel, with the upper half on the north and the lower part to the south have a level difference of approximately one meter. A storm water channel runs along the eastern boundary that spills out into the Narayani River. It is also worth mentioning the roadside storm drains on the north and east sides. The land accommodates two mature  'simal' trees.

The recent Transport Master Plan initiation will likely result in an expansion of the two adjacent roads on the north and east sides by 17m and 3.5m respectively, that would result in a reduction of the site area. With this and the new setbacks set for 6m on the north side and 1.5m on the remaining side will define the placement of the buildings. With the plans for road expansion, one should expect a sharp influx of traffic and tourism in the area, which will lead to settlements sprouting in the neighborhood. The future transport master plan for Madhya Bindu Nagarpalika fore sees a 30 meter wide ring road within its municipality that runs along the northern boundary of the compound.  Thus, in anticipation of increased traffic and construction activity along the widened road a more “Inward looking” concept for the centre seems to be appropriate.

The double storey high façade at the north of the property will serve as a visual and acoustic barrier from the road.  This facilitates a more peaceful and controlled interior of the premises, allowing to conduct its activities in relative privacy.

The interior of the premises is expected to support a diverse selection of activities, some involving the local community, some for academia and visiting faculty of the Centre for Peace Studies as well as daily visitors arriving to view the museum and the memorial site. While designing, focus has been given to a practical separation of the above mentioned user groups to ensure that these activities can function individually, unhindered by each other.

The open space at the south of the property is intended to remain agricultural land.

A waste water management system has been foreseen towards the south east corner of the property. The mood of the campus intends to reflect humility and harmony with its surrounding. The moods and ambience has been derived from the natural built environment in texture, color, form and shape. The design has also adapted to the local climatic conditions seeking ample cross ventilation. The locally used techniques and materials such as timber/bamboo shading elements and mud plaster walls intend to make the buildings appear locally rooted and also facilitate local employment.